I developed a project on Pavlovia over the last year, and after a few months I came back to activate the experiment (set to “Running”), and I got a new message that I had never encountered before: 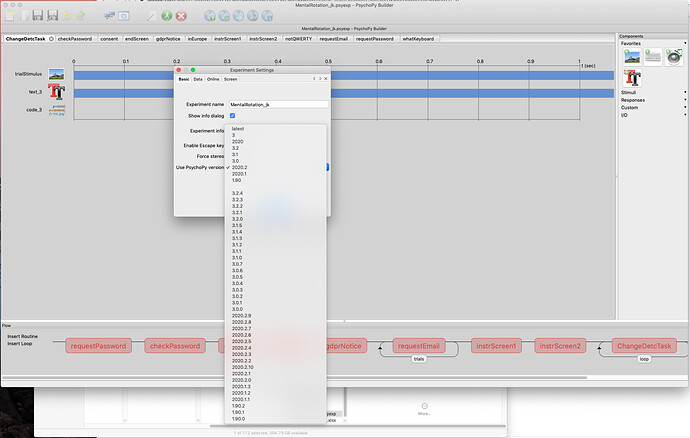 Screen Shot 2021-02-18 at 1.04.40 PM1927×1226 225 KB
Trying to set the version this way did not work (I receive the same messsage, trying several of the version options), and I have not been able to figure out how to change the psychoJS version in the automatically generated js script (this is also not ideal, as I would have to do this every time I make an edit to the experiment). Does anyone know how to change the platform version?

Any help is much appreciated!

Normally it should work just to set the experiment to inactive and then piloting or active again. If that’s not working it may be because you aren’t syncing it viable script. Do you see the green sync icon when you sync or red?

Switching it back and forth between Inactive, Piloting, and Running doesn’t fix it. When I sync from the PsychoPy builder the syncs show up as successful, and if I’m only changing the PsychoPy version (like in the pic above), it shows up as successful as well as noting that no changes were made and everything is up to date.