Deleting both .cfg files, a restart, and clean re-install seem to have fixed this. But now, whenever I try to edit anything in the preferences, I get the following

The above exception was the direct cause of the following exception:

SystemError: <class ‘wx._propgrid.PropertyGridEvent’> returned a result with an error set

I don’t really need to edit anything in the prefs, but thought I’d let you know.

A couple of those I did actually know about

Thanks for the info!

Okay, I can reproduce that error by trying to edit the Hardware → audio library pref “by hand” 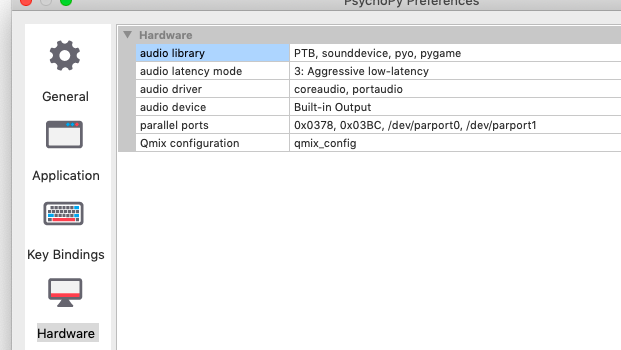 The error does not occur if edit it using the pop up box by hitting the … button on the right, nor does it seem to occur for any of the other preferences I have tried.

Okay, I can reproduce that error by trying to edit the Hardware -> audio library pref “by hand”

Ah, excellent. Now we know how to produce the bug we can work on a fix!

And Todd has fixed another buglet that might fix the non-printing issue. We’ll push out a new version next week. The clicking on the dock thing is likely to be harder though (as in I don’t have a clue what that’s about yet!)

Hopefully catch up with you again at a conference one day, when we’re allowed to move around the real world again!