Description of the problem: Hello all! I’m having trouble uploading an experiment to Pavlovia. There are no errors appearing because I’ll click on the green online syncing globe to sync it and nothing it will load but come to nothing… I’ve waited up to two hours and nothing happens so I’m feeling a bit stuck! Using 2021.2.3 on a Mac.

Hi @stephanie have you tried closing and reopening the app?

I have, but it comes up with the same problem.

Does the sync dialog appear but then just do nothing, or does it not appear? Is there any output in the Runner window?

You can also sync via the

Project Info dialog - have you tried from there? 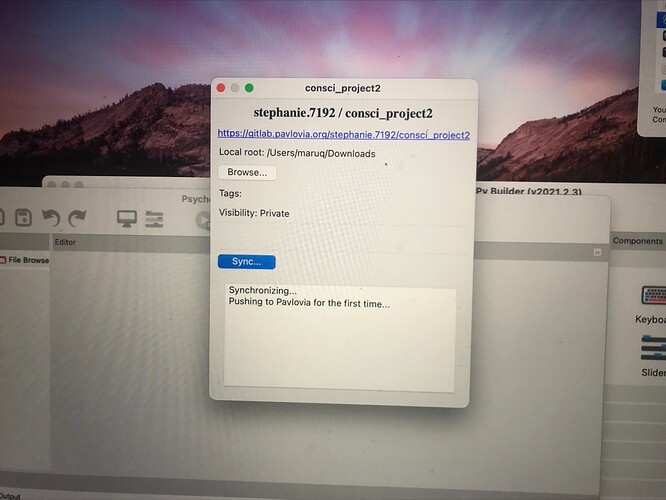 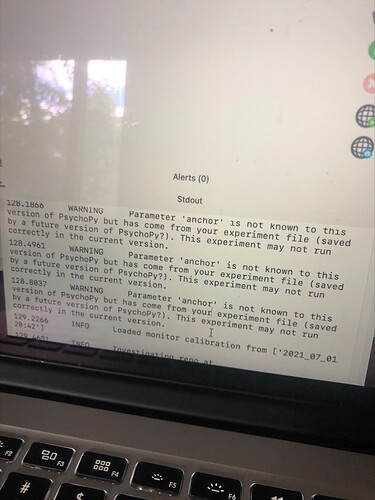 thumbnail_Image2960×1280 171 KB
Tried and got the same response of it loading but nothing happening. In the runner it does say I am using a different version of the exp but it runs normally in the runner
stephanie July 4, 2022, 8:39pm #6

Does it matter that my conditions files are in XLSX??

uploaded CVS files instead and same response so nevermind

ok fixed the problem with the second image so ignore that 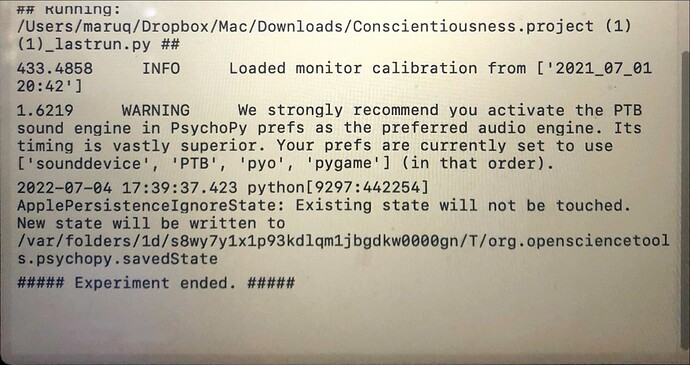 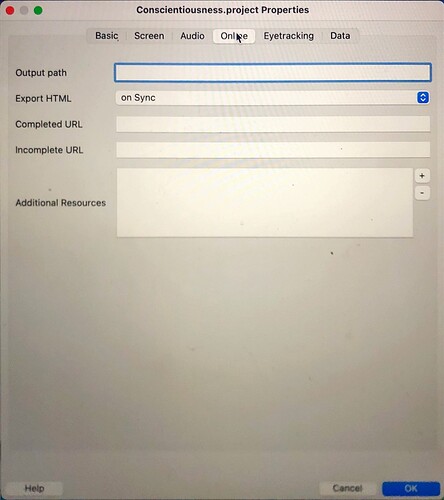 these are the two most recent from my runner, thanks!

This is strange, are you able to update to the latest version? It may be something we’ve fixed since then, or at least will deliver an error which will now be caught and displayed so there’s something to work with.

Ok so I tried it on a newer version and it says that “No module named ‘psychopy.tests’ exists”. I read another post and it said that is due to making it in an older version. So It uploaded to Pavlovia before in this old version, but then I had to change the units to height and now it will not upload.

Sorry for the delay getting back to you!

That’s strange as psychopy.tests shouldn’t ever be called by the program, it’s what we use to test things when developing the library. Can you share the full error?

@stephanie I got the same error, and I’m using the latest version of psychopy (2022.2.4). Did you find a way to work around it?
@TParsons When trying to sync, I get the message “Generating PsychoJS script…” in the runner and it stays like that, for hours. When checking the dashboard on pavlovia, the experiment appears, but the github folder is empty and it’s not possible to run it/make any changes.

That sounds like the project has been created but something has gone wrong and excited silently when writing the script. Could you share the psyexp file of the experiment you were trying to sync?