Variable column based on group

The experiment presents an audio stimuli (4 different audio_prompts) and the order of these should vary by group, so when calling the audio component, I’d like to refer to the variable/column questionN (where N = the list number (1, 2, or 3) entered at the beginning of the experiment), if that makes sence.

Does anyone have suggestions about how to do this? Thanks for your time!!

Hi there, I have 4 conditions in my excel sheet with 104 questions (4 columns and 104 rows). Each round (loop) participants will need to rate 5 questions from each 4 conditions, which means they will need to complete 20 questions each loop/round. I want each routine to display questions from different rows (for example, first questions displays from row 2 in the shame_condition, then the second question will the row 4 (any rows would work as long as not the row 2) in devaluation_condition, and …

Hi Wakefield, thanks for the incredibly fast response!

So, it’s not about randomisation. The thing is simply that we have a slightly asymmetric match between the number of stimuli to number of audio files, but want every stimuli to occur with every audio file at an equal amount across the lists. Hence we need multiple lists with specified stimuli & audio file combinations. If that makes sense?

So basically, instead of saying I want the audio stimulus to be $question1, I’d like to have a kind of $“question”+expInfo[“list”] (this is probably incorrect) so that I only have to have one spreadsheet, but differing audio prompts based on the selected list at the start of the experiment.

I meant that it was code for you to simplify. Something like

Oh, I see, thanks, it looks like that should work, but I get an error currently. Sorry, I’m not the best coder. I’ve added that code to a code component (practice_code), set to the beginning of the routine and then referred to $thisText in the audio component (see picture below), but I get the following error: 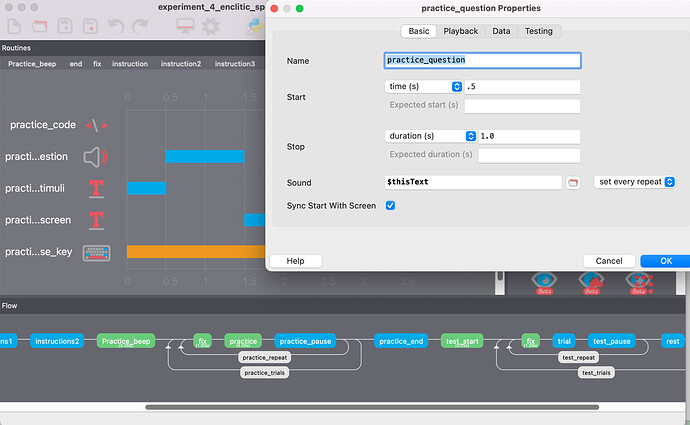 Sorry, my fault. I get confused between thisExp and expInfo. You need the latter.

That’s perfect! Thanks so much, Wakefield!

So for future people with the same problem, adding the following code at Begin Routine with separate columns question1 and question2 solves it.