What are you trying to achieve?:

Below is the overview of the task in Psychopy: 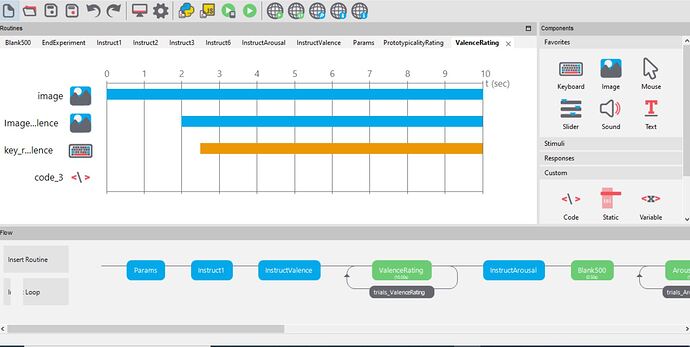 I have a loop for the routine (ValenceRating) to show 1 image per iteration. Below is the condition file for this loop: 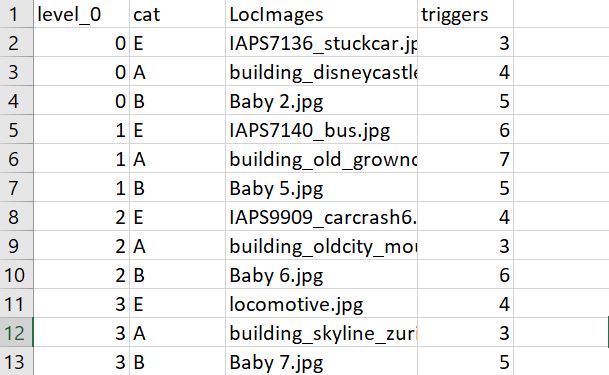 Below you can see the code I have so far in both “begin experiment” and “begin routine” tabs for triggers: 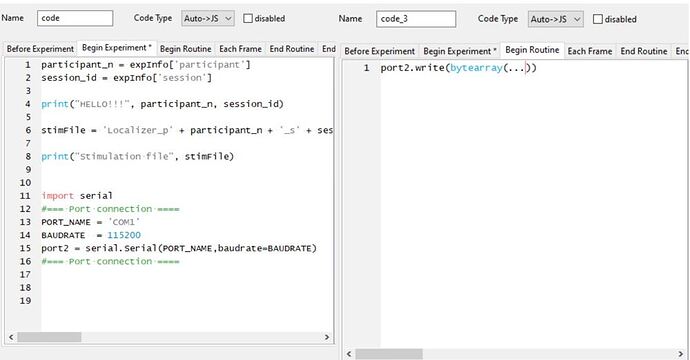 Thank you very much in advance.
Best wishes,
Somi

Thanks for your question - we’re working on making some materials to help people with this - so your questions are really helpful thankyou! In answer to your third question, yes I do think a component for serial port communication would be helpful.

I think this should work. Add a code component and in the “Begin Experiment” tab use:

In your Begin Routine tab use:

in the Each frame tab use:

I think that should do the trick - but please do let me know if not!!

PS. to check the frame timing is write here we also highly recommend checking with a photodiode for visual stimuli if you can.

I have recently managed to send triggers via serial port, with a code similar to yours @Becca

However I have some issues and any help would be appreciated:

1. I want to use the win.callOnFlip function as described in the link above and as can be seen below:

But I receive this error:

TypeError: ‘int’ object is not callable

I have also tried to change the settings in the properties of the excel coloums (I defined the values as “Text”, rather than “Standard”. Because otherwise the first code I wrote above did not work either…) But then, I receive this error:

TypeError: ‘float’ object cannot be interpreted as an integer

Any idea how I can make the win.callOnFlip function work while indexing to my trigger list on the excel sheet?

2. I have realized that not all the triggers are sent to the EEG. And I have figured out a pattern: If, let’s say, two identical triggers (I give the triggers values like 1,2 and 3 on the excel sheet) appear sequentially, then only the first one is being sent. For example, if I have stimuli_2 appear two times sequentially (meaning have two "2"s on the trigger_list_hab coloumn one coming after the other in rows), then a trigger called S2 is sent for the first stimuli_2, but not for the second stimuli_2. Do you know maybe what causes this?

regarding the second point - I am not sure about that - have you tried with values other than 1, 2, 3 ?

Can I also just confirm that you’re re-setting the port back to 0 before sending a second trigger?

Thank you both for your fast replies.

@Becca I have tried the win.callOnFlip function again and I have not received any error this time, when I wrote the code as you suggested. However, triggers are either not sent or sometimes are sent and sometimes not… So, something is not right. I could not figure out what is the issue yet. I have tried changing the properties of the excel coloumn (I have realized when the properties are set to “Text”, only then the port.write function works for me. But I thought maybe this won’t be the case when I use win.callOnFlip. In fact, when I changed to properties to “Number” or simply “Standard”, the triggers started working but as I said, not consistently - i.e some triggers did not appear) Thank you for your help!

@Kimberley_Dundas Well actually, I was not re-setting the port back to 0. Now I am doing that and I can send multiple identical triggers one after another.

Thanks! Putting my code below:

I would also like to ask some unrelated questions.

1.What does the number “0.005” actually refer to in the code above? Is it related to the trigger duration? If I am correct the trigger durations need to be set according to the sampling rate of the recording device. Although I am not sure where to define the duration.
2. I have seen somewhere else that timeout variable can be defined within the serial.Serial function. What does this variable actually refer to and is it important to define it?

thanks a lot for your response. It is all more clear now.

One more question though: is it definetely necessary to set the port back to 0? (I was not doing it until I realized two identical triggers cannot be sent without doing it… But other triggers were working fine)

Re- setting the port to something is necessary, otherwise you’re setting your variable pulse_ended to True but not actually making any changes to the port itself. Therefore when you want to send the same value on the next trial, no changes are made. So if the port was set to send a 2 trigger on one trial, and then the next trigger is also 2, no changes are made as the port is already sending the value you’ve asked for.

thanks again for the explanation