I am currently working on a source memory task where I’m pairing an image with a word during study. During test, participants are shown all image options on the screen and are presented with new and old words and need to click a key corresponding to what image the word was paired to (or new).

The task runs fine and there are no issues with that, however, there are a couple of things left I need to do for some data to be added to the data file.

I didn’t know what would be helpful to include, but I attached the overall task code, study code, and test code. Also, the stimuli file I fed in has two columns, a word list, and an image list.

Thanks in advance and let me know if there is more information you need! 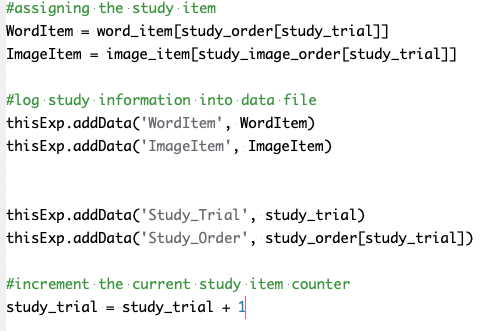 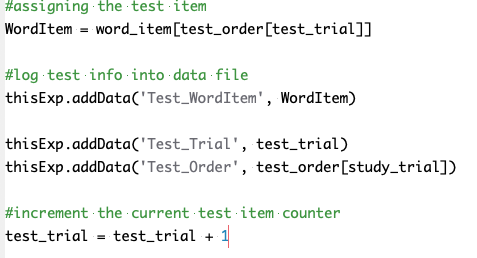 I’m a bit confused about what you’re trying to do, but I’ll try my best to help from what I understand:

I also want to check if you’re running this code locally or plan to run it on Pavlovia. If you’re using Pavlovia, you’re using quite a few functions in your code that won’t translate to javascript, which will make running it online a huge ordeal. I just like to point this out when I see it because fixing the code took so much time and I wish someone would’ve told me before beginning. If you’re running your experiment locally, you’re good and you can ignore this.

Anyway, I hope I understood your questions correctly and that I was able to help!