Hi! I’m new to psychopy and I need help trying to build a complex experiment. The experiment has 3 parts. In the first part, the participants will click and drag 4 pictures (that’s shown above the screen) into 8 possible boxes (I’ll analyze their placement frequencies). In the second part, they need to rate each picture that they saw before in terms of caloric levels and health (they will rate each item in different routines). In the third part, they need to execute the first placement task once more (I want to compare the first and second placement frequencies).
All these steps make one trial. For every trial, there needs to be a different combination of 4 pictures, but within a trial, they need to stay the same.
So far I managed to build a rough experiment but I’m having problems with displaying pictures. In the first part, (in which pictures are dragged and dropped in boxes) I managed to display four pictures, and the dragging works okay. In the third part, the same four pictures reappear but instead of reseting the original places, they appear in the dragged locations. Moreover, when clicking on the pictures, the four pictures change into other pictures, but locations stay the same.
So, my first question is how to code the pictures so that in the rating parts only the four previously shown pics will be shown (instead of random other pictures? Second question is, in the third part (that’s after rating each picture), how to show the same set of stimuli as in the first part that’s resetted to the original locations. After all these 3 parts, another trial will come with a new set of 4 pictures.
If there was little amount of trials, I would specify each picture in the properties box. However since I’ll have many trials, I need to somehow automatize this process. I hope I made it clear. Thank you in advance!

Update: I managed to display the same pictures in order for the rating part. However, I still have problems with the pictures reseting to their original locations.

If there was little amount of trials, I would specify each picture in the properties box. However since I’ll have many trials, I need to somehow automatize this process.

(1) The most important question before anything else: are you using a conditions file and a loop to specify the images used on each trial?

(2) We can’t provide much help without seeing how you are currently doing things. Please provide a screen shot of your flow panel (most important) and of your routine(s) within each trial, and what custom code you are using to control the placement of images.

I’m posting screenshots of the “placement routine”. Because I only have problems with that routine. Currently I used the same routine twice, that’s probably why I have the same pictures showing up in the previously dragged locations. I tried to create a new routine but that created more problems, probably because I used the same code.

I’m uploading my psychopy file as well as the screenshots.
Thank you so much for taking your time to help me, I appreciate it a lot! 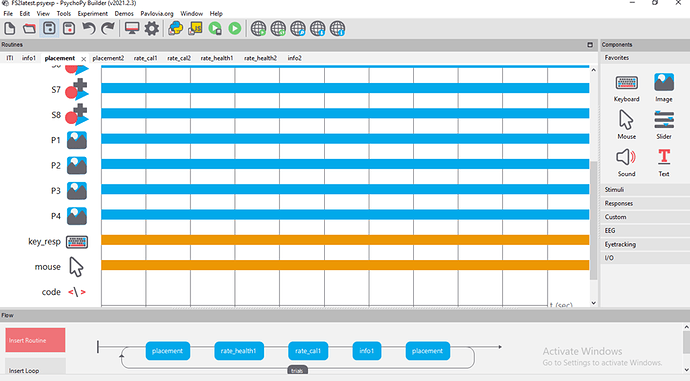 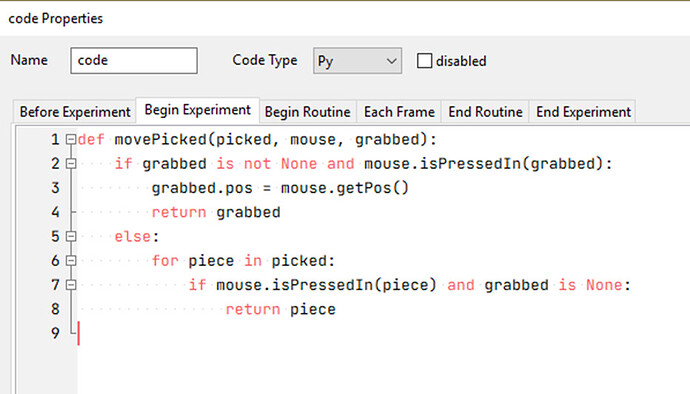