If position of line is (0,0) its` center is located at the center of the monitor. Since the angle should appear at the center the position stimuli should be changed with each orientation.

To control position the lines should be offset from the centre of the screen by half its length at the same angle. So, xpos = cos(x)*length/2, ypos = sin(x)*length/2, where x is orientation in radians.

However, I have a problem, and I can’t figure out where I made a mistake. In my experiment lines are shown with 90 deg relative orientation between each other, but they do not meet in the center of the screen and form an angle. (See screenshots) 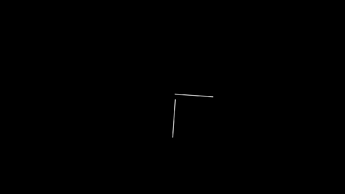 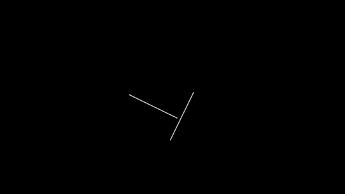 I use builder with additional code component
Here is my code:

I would be very grateful for your help.

Thanks for your suggestion! 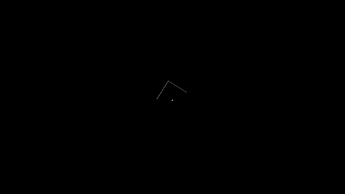 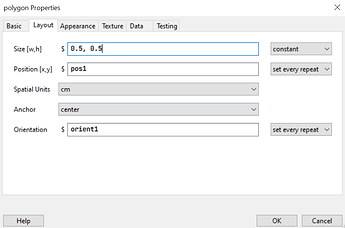 Also, now I have a problem with the dimensions and units. I need the corner to have 7 cm, but if I use the size (7.7) in cm spatial units, the stimulus is too big to be shown on the screen and I can only see part of it in the corner of the screen. I really need the stimulus to have precise size, and I don’t understand how to set it for a custom polygon.

The vertices I gave you were based on a size of 1cm, but I’m not an expert in using cm units (since they don’t work online).

If the position is 0,0 and the size is small enough to see, is it centred?

No, if the position is 0,0 and size is 1 cm it is not centered (see screenshot in my previous reply).

What about at zero rotation? Please could you confirm you’re using the vertices I gave you?

Here is how the stimulus looks with 0 deg orientation 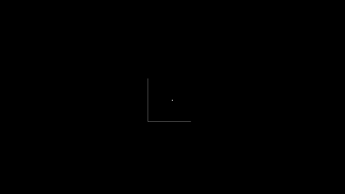 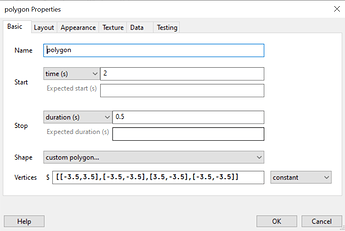 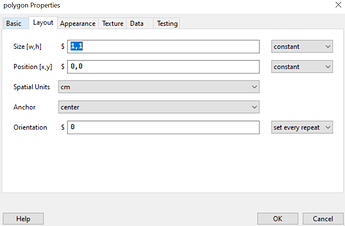 What are you using to make the central dot?

To make central dot I used text component with dot (0,0) position, 0 orientation
It shows square in the center of the screen with given vertices 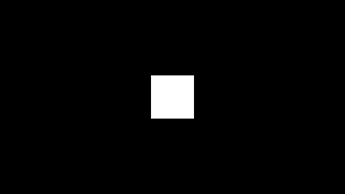 As of 2022.1.0, Polygon stimuli have an anchor parameter which lets you choose which corner of the stimulus is at its position. So if you set its anchor as any of the bottom options it should rotate around the bottom point rather than the center.

I was hoping that it would rotate about the origin of the points I’d specified.

Even after changing anchor parameter to bottom option, the stimuli are not rotated around the center. I used both position custom code pos1=( cos(x1)*0.5, sin(x1)*0.5) as well as 0,0 position, but still the position of stimuli is offseted from center.
Maybe my position code is not correct?