I’ve been editing a task and it functions the whole way through, but sometimes this error pops up, and when it does i can close it and continue but then it’ll start popping up incessantly. The inspection function gives no additional clues, but I’ve included the picture here anyway. Any ideas? Alternatively, is there a way to block non-fatal errors? Literally the output data and everything are fine, but it disrupts the trials obviously. 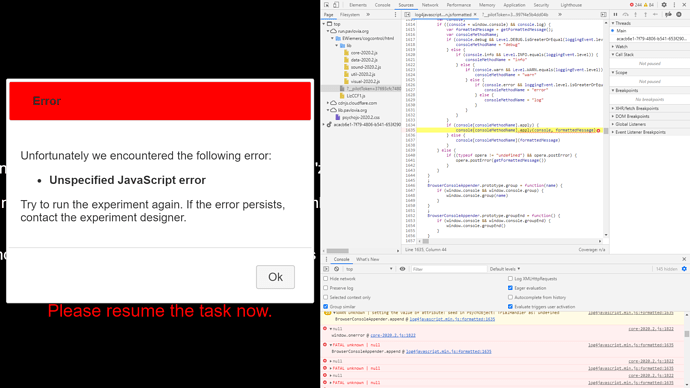 Update: That was the error in Chrome. I tracked down the appender as something that should function in Firefox so I ran the task in Firefox and instead got the error pictured here. The console is equally unhelpful, but I am posting in case it helps anyone make sense of this error. 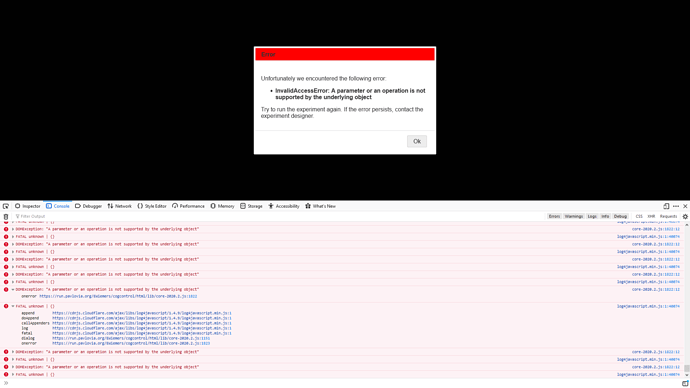 Update: I have solved my issue. There was nothing wrong with the code, which made this challenging. The problem was attempting to use the sound component to generate the sound. I had seen in the discourse that it would not properly generate based on a letter (e.g., ‘A’). However, it is also supposed to be able to generate a sound if you give it a number of Hz, and it does. The sound played when and only when I wanted it, but the error would randomly pop up every time I went through the task (sometimes not until the very last screen). I have since made a sound file and call that in instead. No more error (so far).