Experiment works on Chrome, doesn't work on Safari: psychoJS.experiment._unfinishedLoops.at is not a function

Description of the problem:
Hi all, my experiment works locally, but when it’s online I get the following error message in the middle of the first few trials:

I’d really appreciated it if anyone can give some pointers on what seems to be causing this. Many thanks in advance!!

Did you get anywhere with this? I’m encountering it when ending a loop early.

N.B. This might be related to my phone being old (an iPhone6) since this demo also crashes.
https://run.pavlovia.org/lpxrh6/currentlooptest/

Hi! Thank you so much for taking a look at this! I ended up asking my participants to just not use Safari as it’s taking me too long to troubleshoot. Four participants encountered the error message when using Chrome, but it worked fine for the rest 120 participants.

A similar demo loopname_bug_demo works on my iPhone6 but currentlooptest crashes in both Safari and Chrome. I’m not sure of the difference between the two demos.

Have you had any progress with this issue? I encounter the same error mid-experiment when I press a key to advance to the next screen. The problem is unique to Safari and doesn’t happen on any other browser.

What phone / MacOS are you using?

What version of PsychoPy are you using? 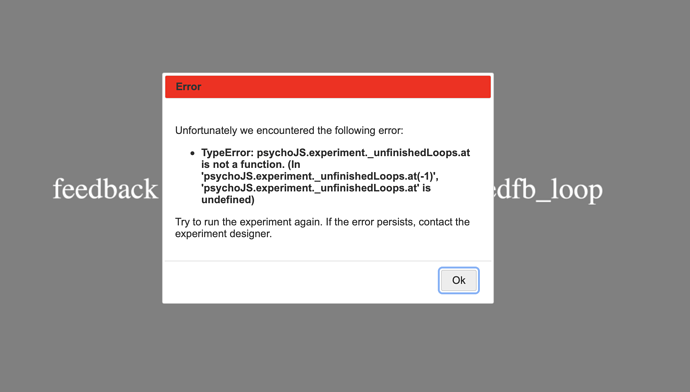 Has anyone found a solution for this? I had a participant have this issue running things on chrome, but it works fine on my chrome browser. This happens with any task and the tasks otherwise work on other computers when I test them elsewhere.

I’ve been getting this too on my iPhone6 whenever I have an experiment which needs to finish a loop early. My solution is to switch the PsychoPy version in Experiment Settings to 2021.1.4. Will that work for you?

Thank you so much for the suggestion.
Unfortunately, that didn’t work for the RA I was piloting with. They tried on their ipad and it worked, then tried on their laptop with safari instead of chrome and safari apparently just closed the window on them.
I’ll get them to try again today, since I’ve also been having syncing issues (the files are synced on the git but the task still runs as an older version). The syncing issues usually resolve if I give it some time though. Hopefully they can send me the messages from the console to see if there are more hints there.

This is a cache issue which I solve by using Ctrl-Shit-R in Chrome or an incognito tab.

Ah! I tried doing ctrl+shift+R before and it didn’t work. I’ll try that again.

Also, the RA got back to me and apparently the older version of psychopy worked on chrome. Doesn’t help with safari apparently. At least that’s one browser that’s useable though!

I also encountered this error with some subjects. And it worked fine with the others. Very Weird.

I am also having this error in Safari (but not Chrome or Firefox) for two recent experiments designed in 2022.2.2. Earlier experiments I’ve designed/run in 2022.x.x with roughly similar loop structures seem to continue to run fine in Safari however.

I’m testing different versions of PsychoPy in the experiment settings, but is this something others have come across recently as well? The errors seem to appear at the end of trial loops even if they are not finishing early, but I’m still trying to find out the exact conditions that it happens. Thanks.